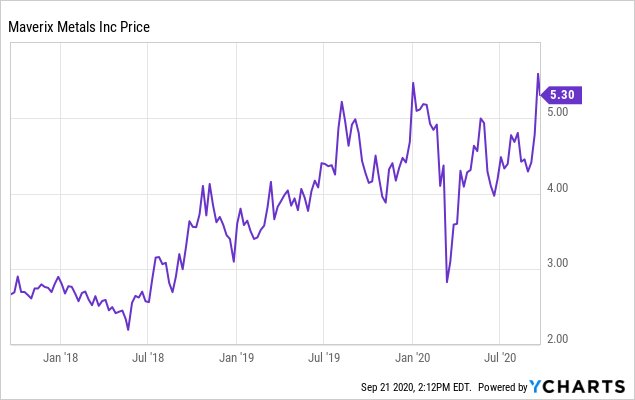 Gold royalty and streaming company Maverix Metals (MMX) has announced the purchase of a portfolio of 11 gold royalties from Newmont (NEM) for total consideration of up to $90 million ($75 million upfront, $15 million in contingent payments) as it continues to execute on its aggressive growth strategy.

Maverix will issue 12 million of its common shares to Newmont and pay $15 million in cash; closing is expected to occur on or before Oct. 30, 2020. Following closing of this deal, Newmont’s ownership in Maverix will increase to approximately 30%, according to the company.

Maverix’s relationship with Newmont is clearly a competitive advantage: Maverix is getting some very high-quality development and exploration assets in this transaction, and the company now has arguably the strongest growth in the royalty sector, as I explain below.

The best assets included in this deal are the construction and development net smelter returns [“NSR”] royalty, which will provide near-term cash flow to Maverix.

An NSR royalty gives the owner gross revenues from the asset, less minor deductions for transportation and refining costs.

Royalties provide exposure to the upside of gold prices, as well as unlimited upside to increases in reserves, resources and production, and mine life extensions, at no additional cost. To be clear, The owner of the royalty is not on the hook for any exploration or development expenses.

I’ve outlined the notable assets below:

Camino Rojo: The 2% NSR on Orla Mining’s (OTC:ORRLF) Camino Rojo project will likely produce near-term cash flow to Maverix. This is a low-cost heap leach open pit gold mine with production slated for 2021.

According to the feasibility study, it will produce 97,000ozAu and 511,000ozAg per year over an initial 7-year mine life. Using spot metals price ($1,900ozAu and $25ozAg), the royalty should produce $4 million annual royalty revenue to Maverix.

Cerro Blanco: Maverix will own a 1% NSR royalty on the Cerro Blanco project, which is being advanced by Bluestone Resources (OTCQB:BBSRF).

A feasibility study outlines average annual production of 113,000ozAu over an initial mine life of 8 years at $579/oz all-in sustaining cost. Upfront capex is very low at $196 million, and the project boasts a net present value of $454 million using a $1,600/oz gold price.

Using spot gold prices, the royalty is estimated to produce $2 million in annual royalty revenue to Maverix. The exploration upside on this asset is excellent, however, and Bluestone recently added 200,000 ounces of gold to its resource base, which is not included in the current mine plan.

Mother Lode: Maverix will own a 2% NSR on Corvus Gold’s Mother Lode project in Nevada. The project has measured and indicated resources of 1.2 million ounces, although there’s big exploration upside as Corvus drilled 125.5 meters at 2.6 g/t gold earlier this year, and more recently expanded the deposit with 56.4 meters of 1.71 g/t gold.

Imperial: The 1% NSR on KORE Mining’s (OTCQX:KOREF) Imperial mine is another excellent asset acquired by Maverix.

The project has indicated resources of 877,000ozAu and inferred resources of 1.3 millionozAu. According to the PEA study completed by KORE, the mine is estimated to produce 146,000ozAu per year over an initial 8-year mine life, with plenty of exploration upside through further drilling.

Based on these figures, the royalty would produce between $2.5-2.7 million in annual royalty revenue.

Argonaut Gold acquired this asset in its takeover of Alio Gold. On Sept. 11, 2020, Argonaut Gold announced it will sell Ana Paula for $30 million, and a $10 million contingent payment and a 1% NSR royalty, to a new publicly traded gold developer formed by AP Mining and Pinehurst.

Based on the production profile from the pre-feasibility study and spot gold prices, the royalty could produce $4-4.5 million in annual royalty revenue to Maverix.

Other assets: The deal with Newmont also includes several exploration assets, which gives Maverix some long-term optionality. The assets include two small royalties on properties owned by SSR Mining (SSRM), called Trenton Canyon and Buffalo Valley, in Nevada. According to Maverix, the Trenton Canyon property consists of 7,350 hectares located immediately south and along the mineralized trend from the producing Marigold mine.

Revenue potential: Based on the publicly released technical reports of the gold operators, and using spot gold prices, I’ve estimated that these royalties could produce up to $14.5-15 million in annual royalty revenue to Maverix.

At a total cost of $90 million, this gives Maverix a potential IRR of 16% on the deal. This assumes all of the development assets reach the production phase, but it doesn’t consider any future production upside.

In 2019, Maverix completed the acquisition of a portfolio of royalties from Kinross Gold (KGC), in which it landed royalties on several exciting development projects such as Integra’s DeLamar project (2.5% NSR), Gold Standard Venture’s Railroad project (2% NSR), and Premier Gold’s McCoy-Cove project (2% NSR). All of these assets have a great shot at getting into production in the near term (3-5 years).

Its other key growth assets include a 2.5% NSR on Coeur’s Silvertip mine, which is temporarily suspended and undergoing a new pre-feasibility study to evaluate a potential mill expansion; a 5% NSR on Waterton’s Gemfield project, which is fully permitted and projected to produce 125,000ozAu annually; and long-term optionality via a 1.25% gross revenue royalty [“GRR”] on Barrick-Newmont’s (NYSE:GOLD) Cerro Casale project.

While Maverix’s current annual production is far less than larger peers like Sandstorm Gold (SAND) and Osisko Gold Royalties (OR), it will likely double its production over the next 3-5 years organically. 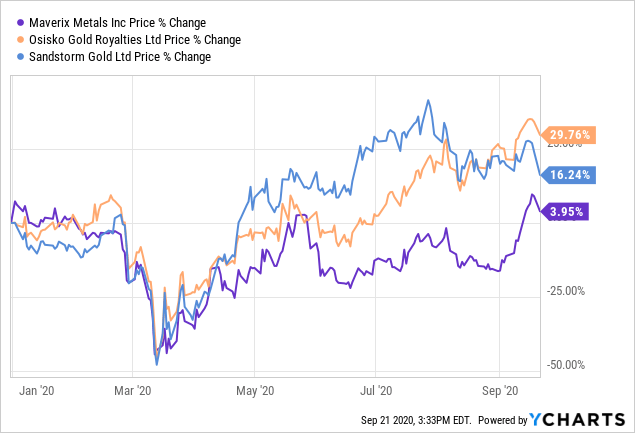 Maverix’s stock was up 5.4% on Monday at one point, but has since followed the gold market lower and is trading down 4.5%. Surprisingly, its shares are underperforming its peers this year, as Osisko Gold Royalties and Sandstorm Gold have both outperformed the stock.

With the stock trading at an EV/EBITDA of 25X and a P/S of 15.80X, Maverix shares aren’t undervalued here, but the company’s growth potential is arguably the best in the industry, and its relationships with major shareholders Newmont, Pan American Silver (PAAS), which owns 20%, and Kinross Gold (KGC), which owns 9%, gives it a strategic advantage over its peers. I think Maverix may start to outperform peers once a few of its development assets achieve production status.

If you want more gold mining stock analysis, subscribe now to The Gold Bull Portfolio. I help my subscribers find the best money-making opportunities in the gold & silver sector.

Receive frequent updates on gold mining stocks, access to all of my top gold and silver stock picks and my real-life gold portfolio, a miner rating spreadsheet with buy/hold/sell ratings on 120+ miners.

I offer a 2-week free trial, and a 37% discount on annual subscriptions vs. monthly, with a 30-day money back guarantee!

Disclosure: I am/we are long MMX, OR. I wrote this article myself, and it expresses my own opinions. I am not receiving compensation for it (other than from Seeking Alpha). I have no business relationship with any company whose stock is mentioned in this article.