Agnico Eagle Mines (AEM) is a 2 million ounce per year gold producer in the midst of significant growth projects to increase throughput and looks set to take advantage of gold prices near record highs and deliver healthy profits.

Over the past year, Agnico is up 29% and is trading almost exactly in line with the gold miners index (GDX). The company trails most of their closest North American peers including Barrick (GOLD), Newmont (NEM), and Yamana (AUY), only outpacing Kirkland Lake (KL) which has severely underperformed since last year. 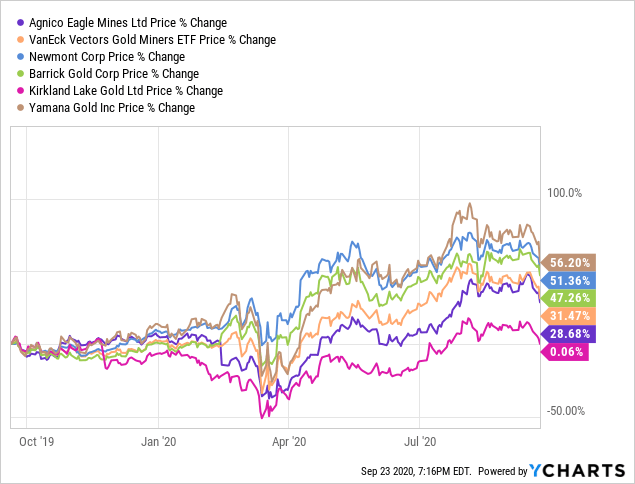 Agnico operates eight mines across Canada, Finland, and Mexico. Their flagship LaRonde mine in Quebec has been the cornerstone of the company since 1988, and the company continues to have a core focus on tier-one jurisdictions, with 74% of their production coming from Canada.

Investors prefer Agnico because its production comes from mining-friendly jurisdictions, with their portfolio offering a lower political risk profile than other senior producers like Barrick, Kinross, and IAMGOLD who have a lot of their production coming from Africa and other high-risk locations. 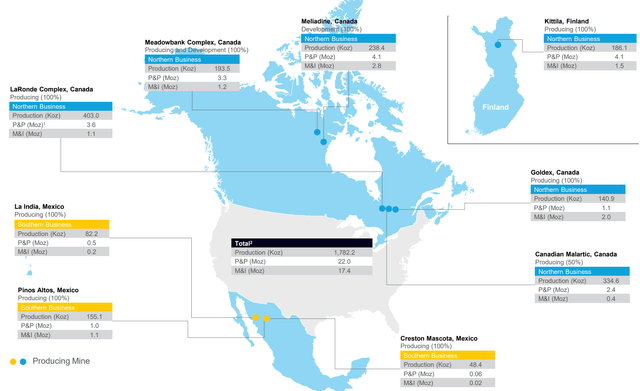 Across all assets, the company has a total of 22 million ounces of gold in proven and probable reserves, with another 18 million in measured and indicated resources.

Based on annual production of approximately 2 million ounces per year, this reserve base roughly translates to a 10-year mine life across all operations. This is fairly good for a gold company but does highlight the ongoing issue within the sector in terms of declining reserves and the need for new projects to fill the pipeline.

In 2019, the company put two new cornerstone mines into production: Meliadine and the Amaruq satellite deposit at Meadowbank, both in Nunavut, Canada. There have been some delays with ramping up these mines, but that’s not out of the ordinary for the majority of mining projects, especially ones in remote northern locations like these. Combined these two operations are forecast to contribute 750,000 ounces of gold per year by 2021, adding a significant boost to Agnico’s overall production profile.

On top of their technical ability to build mines in challenging conditions, management are proven operators, having beat production guidance for eight years in a row. The company hit record gold production in 2019 and forecast that output will grow another 24% over the next two years.

The two key projects under construction at the moment include expansions at Kittila and Meliadine Phase 2. Past those, management is looking at the underground potential at both Amaruq and Canadian Malartic, with the Amaruq underground deposits potentially in production by 2022. 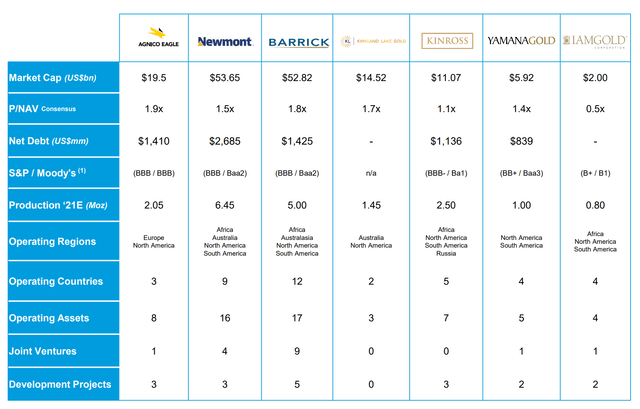 Premium Valuation Despite a Lack of Free Cash Flow 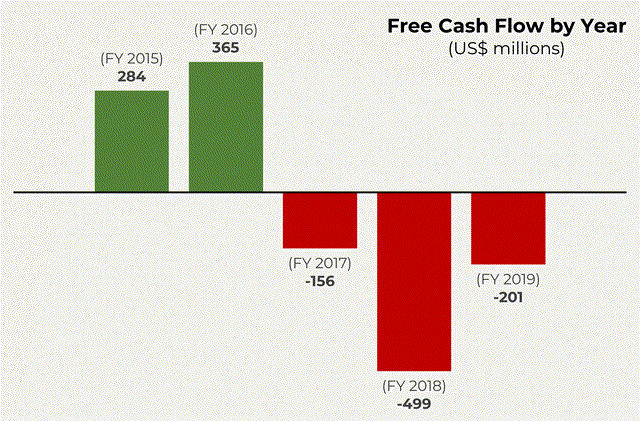 After spending $3 billion on capital expenditures in the last three years alone, the company is finally set to reap the rewards of these major new growth projects coming online.

Amid the COVID-19 pandemic, seven of the company’s eight mines went through temporary shutdowns. Operations began to resume in June ahead of schedule, and after ramping back up to full capacity, the company expects to produce 1 million ounces at all-in sustaining costs of $1,050 per ounce in the second half of 2020.

This healthy operating margin at current gold prices around $1,900/oz should lead to significant free cash flow generation over the coming quarters.

The question is, how will management deploy this new cash flow after years of spending on growth capex? Instead of continuing to deploy it on internal projects, investors would likely rather see the cash put to reducing debt or as part of a deal to acquire producing assets.

Looking at the balance sheet, at the end of the second quarter, the company had $336 million in cash and equivalents and over $1.8 billion in debt. While this level of net debt is in-line with most of the other gold majors (expect Kirkland Lake which is debt free), it would be prudent for management to take advantage of high gold prices and anticipated free cash flow to pay down some debt and increase the company’s flexibility for harder times in the future.

With Major Assets Now Built, Agnico Could Look to M&A

Gold majors are set to make huge profits at current metal prices. Investors are no longer as sensitive about AISC, and most balance sheets are much healthier than they were at the top of the last cycle, so shareholders are now more focused on what management teams will choose to do with their growing war chests. It seems unlikely that they’ll return cash to shareholders like the major diversified mining houses have been doing in recent years. Unlike iron ore and copper operations that have mine lives measured in decades, the gold sector faces very real production shortfalls due to a lack of new discoveries and investment. Companies will be forced to acquire projects, but, hopefully, will try to be more careful and measured than at the top of the last cycle.

While the company’s cash position is not that high, with a market cap of $18 billion, the company has the scale to do share-based deals or do a large financing to complete a transaction.

Long-serving CEO Sean Body is potentially looking at retirement, and Agnico trades at the highest valuation multiples among its peers. So, the big question is, what will they do next?

As we recently outlined, we believe a logical tie-up would be between Agnico Eagle and Kirkland Lake. Agnico can use its premium trading multiple to secure a reasonable deal for its shareholders (and get access to Kirkland’s stronger balance sheet), and the combined company would be a go-to gold mining name that could compete with Newmont and Barrick. Together, they would have one of the highest quality portfolios and almost all of their production would come from Canada and Australia, unlike other majors who have a significant amount of production in Africa and Latin America.

On the smaller end of the spectrum, Agnico also holds stakes in several junior companies that could lead to eventual acquisitions.

Its biggest position is a 9.2% stake in Orla Mining (OTC:ORRLF), which is advancing its Camino Rojo project in Mexico towards production with its first gold pour expected in 2021. In February, Agnico invested $13 million into junior explorer Rupert Resources (OTCPK:RUPRF) for a 10% strategic position. Rupert is advancing the Pahtavaara gold project in Finland, only 50 km from Agnico’s 4 million ounce Kittila operation.

After years of negative free cash flow from bringing major new projects online to boost production, Agnico Eagle is entering the profitable harvest phase with gold near all-time highs. Management may use this excess cash to pay down debt or pursue a new acquisition.

With the stock trading at a premium to its peer group, and recent performance in line with the gold miners index, there may be less upside in Agnico from these levels compared to other names. It is a stable, well-run company, but we see better value elsewhere within the senior group, namely Kirkland Lake.

It may also be worthwhile for investors to consider which smaller juniors Agnico are most likely to buy like Orla Mining, as they look to grow production further in their preferred jurisdictions.

Disclosure: I/we have no positions in any stocks mentioned, and no plans to initiate any positions within the next 72 hours. I wrote this article myself, and it expresses my own opinions. I am not receiving compensation for it (other than from Seeking Alpha). I have no business relationship with any company whose stock is mentioned in this article.