Home Blockchain When the US dollar is worth nothing, will Utah lead the way... 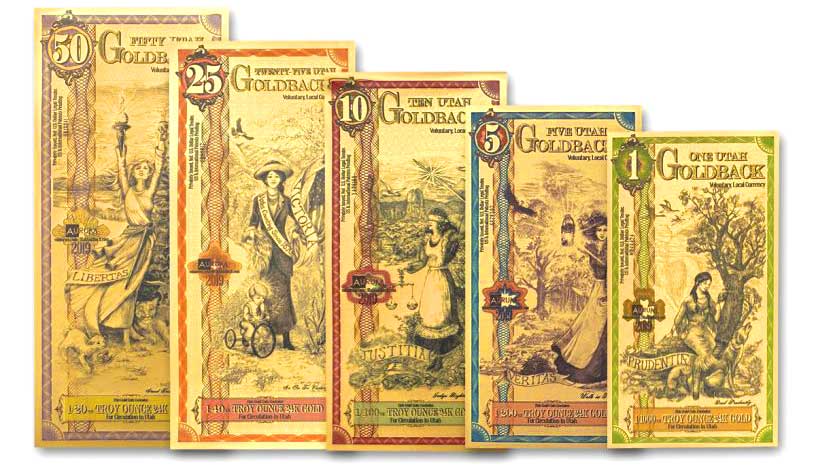 Is blockchain currency too intangible and complicated for you? Does Facebook Pay feel too In-Zuckerberg-We-Trust? Does your couch potato lifestyle prevent you from going on a Sweatcoin shopping spree?

Could Goldbacks, the world’s first local, spendable, voluntary currency made of physical gold, be the alt-tender answer? The Beehive State is leading the way with the Utah Goldback, a new currency that holds legal status in the state by way of the Legal Tender Act of 2011, which recognized specific forms of gold as currency, and allowed small amounts to be used as a form of payment and monetary exchange within the state among individuals and businesses who accept it. The polymer paper bills are coated with real gold and come in denominations of 1, 5, 10, 25, and 50.

An alt-currency enthusiast friend recently gifted me with a fiver (a bill backed with 1/200th of an ounce of pure gold), which left me feeling like Charlie Bucket and my wallet looking like a winning Wonka Bar every time I opened it. Glimmering, brilliant, yellow gold illustrated with a depiction of Veritas; it was maybe the first time in my life I actually wanted to hold onto my money rather than spend it. Probably a good thing, since I don’t live in Utah. Maybe the nationwide use of Goldbacks would encourage Americans to save more because you just don’t want to give these beauties away, the way they catch and reflect light is nothing short of mesmerizing. Cats would probably love them too.

Goldbacks have been praised as an inflation-proof alternative to the dollar, which might come in really handy soon enough, and while it addresses the problems of fiat currency, some critics say they aren’t cost-effective; much more is spent on Goldback production than paper money. There are also concerns about wear and tear with use, causing a diminishing supply. And what happens to one after it’s forgotten in a pocket and goes through the washing machine? I’m not willing to experiment.

1000 Goldbacks = 1 ounce of gold (1 Goldback is backed by 1/1000th of an ounce), and because the price of gold is fluid, the price of Goldacks is too. You can buy them from an authorized dealer, or even shake shit up and start a Goldback movement in your own state.

“Gas taxes pay for the upkeep of our roads, but electric cars don’t use gasoline,” Jonathan Gitlin writes at Ars Technica.

I was scrolling through Jalopnik earlier today when HOLY CRAP THERE’S A COP SAVING A DUDE FROM GETTING HIT BY A TRAIN! From the Utah Department of Public Safety: This morning, Trooper Ruben Correa pulled an unconscious driver from his vehicle seconds before it was struck by a train. Trooper Correa had been on a […]

From Bears Ears in Utah, a 2,000-year-old tattooing tool is rediscovered

In the same week that Democrats announce they’ll hold hearings to probe why Trump’s Interior Department shrank Bears Ears National Monument by 85%, the internet is abuzz with this image. Archaeologists have identified this artifact as a 2000-year-old tattooing instrument, unearthed from Bears Ears in Utah. New findings published in the Journal of Archaeological Science: […]

When it started in 1999, San Francisco-based upstart Salesforce wanted to become the primary digital home for companies to track their interactions with clients and work on converting more sales through better communication and smarter analytics.  Fast forward 20 years and Salesforce has mostly accomplished that goal. As the world’s no. 1 customer relationship management […]

We all know the way a cup of coffee can immediately jump start our day. Yet, we also know that for many, coffee is…well, an acquired taste. Coffee has bite. It’s also pretty acidic and not always everybody’s idea of a good time beverage-wise. That’s part of why the cold brew phenomenon has taken hold […]

Screwdrivers are among the most used tools in the old household toolbox. But for all of their utility, the garden variety flathead or Phillips can come up short more often than you’d like. Some projects require finer precision for more delicate work, while others need as much power as your forearm can muster to tighten […]

Getting Drawn Into DeFi? Here Are 3 Major Considerations

Build The Truth Block By Block